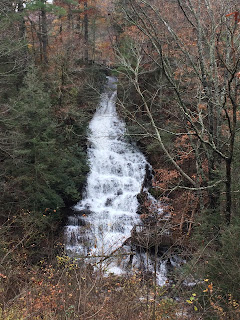 We arrived in Vogel State Park on June 1. Vogel is a beautiful park. We ended up staying there for six months! The people were very nice, we made some good friends and would definitely return to work or just to visit. We love Blairsville and the cool temperatures all summer were enjoyable.

Traylyta Falls, there are gorgeous. If you're ever in the area, it's a place worth spending some time at. There are beautiful campsites and cabins. My favorites are the original cabins built by the Civilian Conservation Corp in 1929. They were remodeled recently!

The towering oaks and hemlocks that fill the property are breathtaking, but a word of caution for sun worshippers, not many rays get through the dense canopy! The sound of Wolf Creek is always relaxing and the tempo of its music changes with the amount of rainfall. We heard it change from a quiet gurgling creek to a rushing wannabe river. But always it is crystal clear and chilly.

We enjoyed the trout release when fathers and sons are allowed to fish the creek together. The youngsters and adults had a great time splashing in the clear water whether they were catching or missing the tricky trout.

The Naturalist that is on staff throughout the summer plans many fun activities for the children. She took them on hikes and had games and activities on the creek bank. Every time we saw a group with her, there were smiles on all the faces.

Shortly after arrival, I got to see my very first black bear and cub. It was amazing. I was happy for days after seeing that very tiny cub with its mother. Bears are amazing creatures, but we had some learning experiences while we were there and a few words of caution to offer to my readers. Please don't leave garbage or food out while you camp or live in bear country. The mama bear and cub ended up attracting the attention of too many campers who thought it was cute to entice the cub with all kinds of treats. The cub became unafraid of humans in a very short amount of time, the mother became very aggressive and also unafraid of humans. A bear trap was set up to catch her. She wasn't caught but ended up getting struck and killed on the highway. The cub struggled to survive for a while by raiding campsites but eventually disappeared. She eluded capture and probably would not have survived anyway. Cubs need their mothers for three years in order to survive on their own.

It's a sad story, made sadder still because while campers were enticing the cub, they managed to feed several other bears, who ended up becoming a dangerous nuisance. These bears were captured. I am unsure if they were relocated or euthanized. I was told by a reliable source that they were probably euthanized. There isn't anywhere to relocate a bear that it won't come into some kind of contact with humans.

On a happier note, one mother bear with her twin cubs was discouraged from hanging around the campsites with a paintball gun. She is still living in the wild areas of the park with her babies and is only seen occasionally. But my request is to please think about the consequences of your actions when you are getting a cute photo opportunity with a wild animal, you may be endangering yourself, but you are definitely endangering the animal.

Enjoy your next camping excursion and be safe! 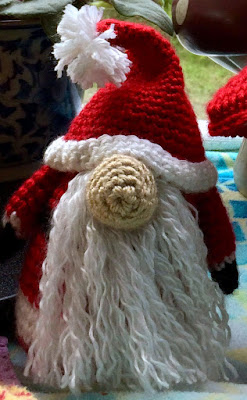 After Christmas and a New Year Ahead 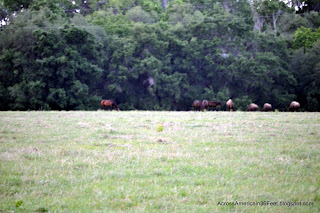 There are link texts, sometimes linked images that will lead to my Amazon storefront. If you choose to purchase an item through one of these links, I will receive a very small amount.
Supporting this blog through these links will not affect the purchase price of the item and I will always link to the least expensive listing on Amazon that I can find for my readers.
Thank you!